We Must Do Everything To End Insecurity, Buhari Tells NASS 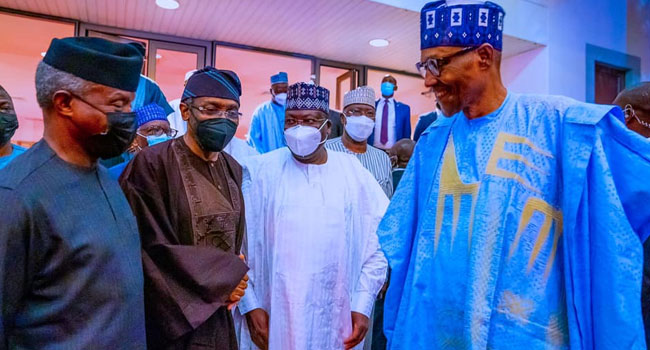 President Muhammadu Buhari has reiterated his administration’s resolve to tackling all forms of insecurity in the country, vowing to deploy all resources to making the West African nation safe from threats.

The Nigerian leader spoke on Tuesday when he hosted members of the National Assembly to a dinner at the State House Conference Centre in Abuja.

‘‘In the circumstances, we must do everything within our power, without consideration of distractions, to put an end to their activities and bring them to book,” Buhari told the lawmakers while admitting that many people take to crime do so due to diverse reasons including promotion of some “discredited” ideologies.

‘‘We cannot allow ourselves to be distracted from this objective, or waver in our commitment, and I am confident that together we will triumph in our present efforts.’’

Buhari, who described the National Assembly as ‘‘full partners in national development,” hailed the lawmakers for building and maintaining a seamless relationship with his administration.

‘‘The obligation to check and balance each other is not an invitation to conflict, and it should not be characterised by quarrelsome disagreement when consultation, engagements and compromise have proven time and again to be a more effective approach,” the 78-year-old was quoted as saying in a statement issued by his media aide, Femi Adesina.

‘‘In the 9th Assembly, you have distinguished yourselves by your conduct in office, by the scale and quality of your legislative interventions, and by your capacity for engaging with the difficult questions facing the country with maturity and competence.”