We Have Increased Ekiti IGR From N450m To N800m Monthly – Fayemi 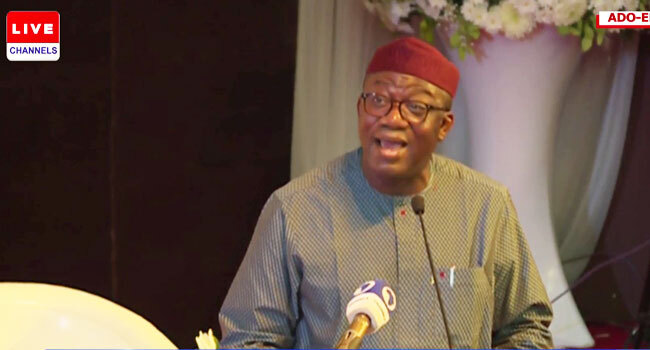 He disclosed this on Thursday during the Fountain Summit 2021 with the theme ‘Investment Attractiveness and Economic Development in Ekiti State’ which held in Ado-Ekiti.

Fayemi, who is also the Chairman of the Nigerian Governors Forum (NGF), however, said his administration has plans to boost the IGR to hit a landmark N1 billion monthly.

As part of measures to achieve the target, the governor said the south-west state will “fully implement the autonomy of our internally revenue service to complement the digitization of revenue collection launched last year.”

“We have also focused on increasing Internally Generated Revenue significantly. When we retuned to government, the state was earning an average of N450 million per month which has now gone up by 45 per cent to N800 million,” he said.

“We now have a goal to attain N1 billion per month in 2021 which we have successfully achieved twice already.”

If the N1 billion target is achieved, Fayemi explained that the state government would have more funds for capital projects while developing the state further.

While noting that his administration has just completed the Ekiti State Geographic Information System Infrastructure, the governor believes the move would enable the government reform its land and property administration process thereby leading to more increased revenue.

The Ekiti governor also gave an account of some projects ranging from roads to schools, healthcare facilities, embarked on his administration to better the lives of the people of the state.

According to him, the state government is also investing in security, building an independent power projects, tackling environmental and climate issues, water and sanitation among others.

He added, “Despite our lean resources, we have begun the implementation of the minimum wage in the state. In addition, we have kept our word to make salary and pension payments sacrosanct and we have not failed in this since our very first month in office.

“Our commitment is to continue the prioritization of staff welfare in development to ensure that the civil service which is the engine room of any government is well resourced to deliver optimal result.”