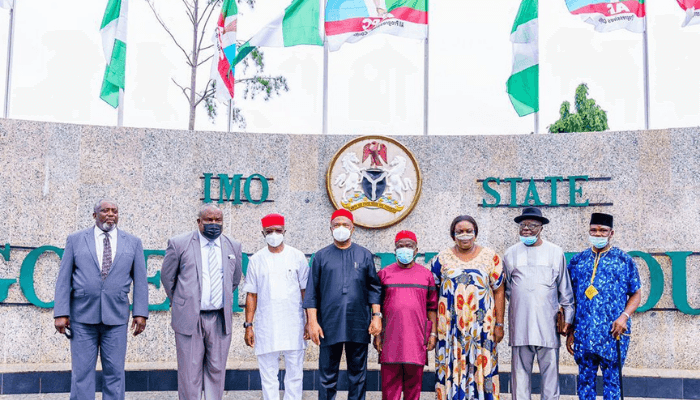 Governor of Imo state, Hope Uzodimma has inaugurated the Whitepaper Implementation Committee on lands recovery and other related matters.

The governor charged members to recover all the assets gazetted in the Whitepaper as recommended.

Performing the ceremony at the government house ex chambers, the governor directed the committee not only to recover as recommended by the Whitepaper all illegally acquired Imo assets but also recommend to the government how best to put into use the recovered assets.

He described the action as an integral part of the shared prosperity administration in Imo state, pointing out that with the implementation the “3R mantra” will be further amplified.

“You must implement the recommendations to the last letter as the demands of the Whitepaper are unambiguous. This is because both government and people’s property were illegally and fragrantly acquired by few individuals and their cronies without regard to the rule of law”, he said.

Considering the importance attached to the Committee’s assignment, the Governor asked them to “ensure that every aspect of the Whitepaper is implemented,” noting that Imo people expect nothing less. The recovery of all stolen Imo wealth is nothing but what the people need.”

The governor warned over impunity and lawlessness against anybody or group who has genuine complaints to make to the Committee. He charged the members to be fair and firm, no matter whose ox is gored.

Reminding Nigerians of the essence of panels of inquiry and the attendant Whitepaper that follows it as well as the need to implement such outcomes, the Governor said that Whitepapers are to check excesses in both public and private service.

In his acceptance speech, the chairman of the committee, Ukachukwu Awuzie thanked the governor on behalf of his colleagues for giving them the opportunity to serve the government and good people of Imo State in that capacity and described the opportunity as a privilege.