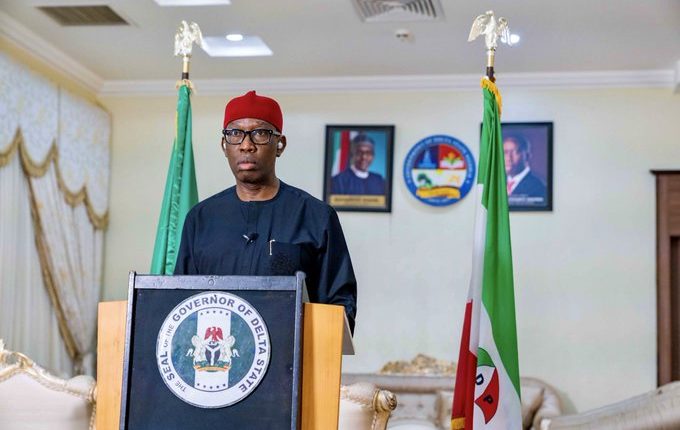 Palpable fear has gripped residents of Delta State following threats of invasion and bombing of the state capital, Asaba and Agbor, headquarters of Ika South Local Government Area of the state by a faceless ‘Fulani Jihadist’ group.

The group, which claimed responsibility for the fire incident that gutted the Federal Secretariat complex along Okpanam road, Asaba, warned Governor Ifeanyi Okowa to immediately withdraw his stand and support for the banning of open grazing in a recent southern governors meeting held in May and hosted by Okowa in government house, Asaba.

In an unsigned threat letter titled ‘Fulani Jihadist Warnings!!!: An Open Message of 2 Paragraphs to Delta State’ pasted in strategic places across the state capital and Agbor on Sunday, the faceless group warned Governor Ifeanyi Okowa against any failure to adhere to their demand for his withdrawal from the ban on open grazing within 72 hours, it would invade Asaba and Agbor.

“This is to inform Delta State that the Fulanis of Usman Dan Fodio leadership shall do everything it can to uphold the legacy of our heritage of open grazing, for we are nomadic people from origination and shall never negotiate the ownership of Nigeria and West Africa and Sub-Sahara.

“We hereby demand the Governor of Delta State to immediately withdraw his early stand for the call to ban open grazing in 17 regions in not less than 72 hours from the above date and also, withdraw his position as the leading voice for the governors, as no occurrence we don’t have the first-hand information, even before the hosting of the South-South, South-East and South-West governors meeting in Asaba.

“Failure to adhere to this demand, Delta State, most likely the city of Asaba and Agbor, shall encounter severe consequences than that of Bornu, Kebbi, Kastina, Kaduna, Enugu, Benue, Oyo and many more that will not respect the Fulani’s heritage, as we take responsibility for the detonate explosive uncovered in the state capital secretariat, which should serve as a warning to the Delta State Government for what is to come, should the governor fail to abide by our demand.

“We highly advise all Fulanis and northerners, including the security personnel, to leave Delta State as soon as possible for the wind of our action is now present in the land, for the failure of the governor to adhere to our call, this shall leave us with no choice. Therefore, Deltans, be told, be informed, be prepared.”

Meanwhile, calming the already heightened tension in the state over the ‘Fulani Jahadist’ group’s threat, the state Commissioner of Police, Ari Muhammed Ali, assured residents that all modalities had been put in place to forestall any such occurrence.

A statement entitled, “Delta State Police Command Assures Deltans Of Their Safety And Security,” signed by the state acting Police Public Relations Officer (PPRO), DSP Edafe Bright, said, “The attention of the command has been drawn to a recent publication making rounds purportedly published by the Fulani’s of Usman Dan Fodio leadership tagged “FULANI JIHADIST WARNINGS” and pasted in various locations around Asaba and Agbor to be precise.

“The command, under the watch of CP Ari Muhammed Ali, FCIA, psc+ who is ever committed in its responsibility of providing security for all Deltans, is assuring members of the public to ignore the said publication which miscreants must have pasted to create panic in the state. All modalities have been put in place to forestall any of such occurrences; all residents are advised to go about their lawful businesses without fear or panic.

“Undercover police operatives have been deployed across the state to gather intelligence. In addition, other proactive measures have been put in place by the command. However, members of the public are also urged to continue to partner with the police by providing useful information that will help in policing the state.”