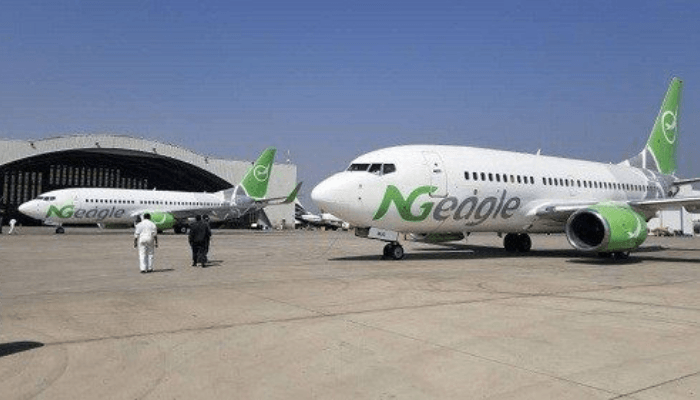 The Senate Committee on Aviation has directed the Nigeria Civil Aviation Authority (NCAA) to suspend, with immediate effect, the issuance of an Air Operating Certificate to the prospective airline, NG Eagle.

This is in consonance with the decision of the House Committee on Aviation.

The Association of Nigeria Aviation Professionals, (ANAP) and the National Union of Pensioners (NUP) had alleged that AMCON acquired Arik Air properties and decided to change the name to Nigeria Eagle Airline to evade payment of the monumental debts owed to all the aviation agencies by Arik Air.

The petitioners further alleged that AMCON has changed the livery on Arik Air aircraft to NG Eagle, which showed that it has fully acquired Arik Air assets but wanted to abdicate its liabilities through a name change.

In a letter dated 11th October 2021, addressed to the director general, NCAA, the Senate Committee on Aviation stated that it recieved a joint petition by the Association of Nigeria Aviation Professionals and the National Union of Pensioners, FAAN Branch.

It stated that the joint petition challenge the application of AOC by AMCON to NG Eagle.

“The petition particularly stipulated that the application of AOC Is unrealistic and unfeasible as the debt profile of Arik Airlines which is presently under receivership by AMCON is enormous. Therefore, the notion that AOC be granted to NG Eagle while it uses Arik aircraft which accounts as part of the assets of Arik Airlines will invariably undermine the receivership.

“As a reference point, the union have cited the Bellview airline instance where huge debts owed to agencies before it’s transformation to First Nation Airways was yet to be recovered as we speak,” the letter reads.

It disclosed that the essence of the suspension is to enable the committee and relevant authorities carry out a thorough investigation on all the allegations levelled by the union in their petition. “The committee expects full compliance of the directive until a workable resolution is achieved,” the letter reads.