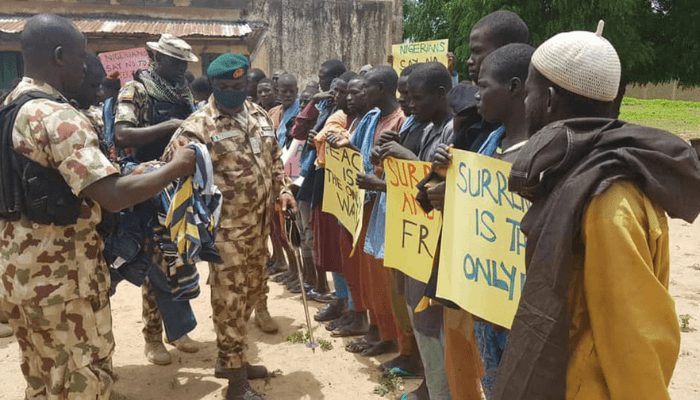 At least 13,243 Boko Haram terrorists and their family members have so far surrendered to troops at different locations in the Northeast, the Nigerian military said on Thursday.

The military said the feat achieved is as a result of the series of operations conducted across the North East theatre which reduced the operational capabilities of the insurgents; an indication that the Nigerian troop is winning the war against terrorism.

Bernard Onyeuko (Brigadier General), the acting director, Defence Media operations (DMO) who made this known in Abuja while giving a breakdown of the activities of troops between 1st and 14th October, said those who surrendered comprised 3,243 adult males, 3,868 adult females and 6,234 children.

He added that within the period, 38 assorted weapons and 968 rounds of assorted ammunition as well as 48 rustled livestock among several other items were said to have been recovered in the region by troops of Operation Hadin Kai.

Onyeuko also informed that several terrorists were neutralized and several others arrested alongside their informants and logistics suppliers. He added that more terrorists have continued to lay down their arms and surrender to their troops with their families.

“Cumulatively, within the period a total of 29 terrorists were neutralized and 13 terrorists including their informants/collaborators and logistics suppliers were arrested in the course of the operations,” Onyeuko said.

Similarly, the director said troops of Operation Hadarin Daji sustained its offensive operations in the Northwest which resulted in the rescue of kidnapped civilians, neutralization of armed bandits, recovery of arms and ammunition as well as the arrest of some criminals elements.

“One of which was at the Kwaga forest within Birni Gwari general area in Kaduna State. In the course of the operation, no fewer than 40 armed bandits were neutralized and several structures which served as their logistics bases were destroyed,” he said.

Onyeuko further informed that no fewer than 51 illegal refineries have been deactivated by the troops of Operation Delta Safe in the Niger Delta region.

He said troops of Operation Delta Safe sustained operations to forestall the activities of economic saboteurs and other criminal elements in the South-South Zone.

“In the course of the operations, troops discovered and deactivated a total of 51 illegal refining sites.

“Additionally, 23 criminal elements were arrested and 73 rounds of 7.62mm ammunition, 5 cartridges, 2 AK-47 rifles, one double-barrel gun, one pump action gun and three locally-made pistols among other items were recovered in the course of the operations in the Zone.

“Consequently, a total of 317,450 litres of illegally refined AGO, 8,000 litres of DPK and 159,000 litres of stolen crude were recovered in the course of the operations.

“These were in addition to several other vehicles and boats loaded with sacks/polythene bags and jerry cans of illegally refined oil products and equipment used for illegal oil production as well as illicit drugs; impounded by troops within the period,” Onyeuko said.

ALSO READ  Drought agency on the spot over Sh160m grants