One Killed As Truck Hits Crowd At Florida Pride Parade 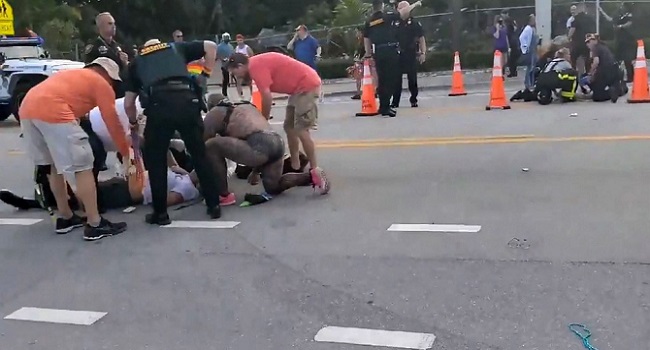 The driver of a pickup truck slammed into a crowd gathering for a Pride parade Saturday in south Florida, killing one man and injuring another, authorities said.

While the truck appeared to be taking part in the procession, it was not immediately clear if the crash was a deliberate assault or an accident. Police detective Ali Adamson said officials were evaluating all possibilities.

The incident happened at the start of the Wilton Manors Stonewall Pride Parade and festival, an LGBTQ celebration in a town near Fort Lauderdale.

The white pickup truck was lined up with other floats for the parade when it accelerated and ran into pedestrians before crashing into a plant nursery, Local 10 News said.

The driver was later taken into custody.

Two adult men were transported to a medical center where one later died, Adamson told reporters in a televised press briefing. The other remains hospitalized but is expected to survive, she added.

The driver and the victims are members of the Fort Lauderdale Gay Men’s Chorus, according to a statement from the group’s president Justin Knight, who called the incident an “unfortunate accident”.

“Our thoughts and prayers are with those affected by the unfortunate accident that occurred when the Stonewall Pride Parade was just getting started,” he said in the statement.

“Our fellow Chorus members were those injured and the driver is also a part of the Chorus family. To my knowledge, this was not an attack on the LGBTQ community. We anticipate more details to follow and ask for the community’s love and support.”

Fort Lauderdale Mayor Dean Trantalis, who was at the parade, told a local broadcaster he thought the crash was “deliberate”.

In the immediate aftermath, he called it “a terrorist attack against the LGBT community” and claimed the truck had targeted the car of a Democratic congresswoman, Debbie Wasserman Schultz — who was in a convertible waiting to take part in the procession — but narrowly missed her.

Wasserman Schultz said on Twitter that she was “heartbroken” by what had taken place.

“I am deeply shaken and devastated that a life was lost,” she said.

“My staff, volunteers and I are thankfully safe,” she added.

The Wilton Manors Police Department tweeted Saturday night after the crash that the public was not in danger.

While the parade was cancelled “due to a tragic event”, the other festival events continued, it said.

Broward County Sheriff Gregory Tony said on Facebook that he had also been at the scene.

“This tragedy took place within feet of me and my (Broward Sheriff’s Office) team, and we are devastated having witnessed this horrific incident,” he said.

“Our prayers are with the victims and their families. Be sure to hug the ones you love tonight.”

June is Pride Month, which commemorates the 1969 Stonewall riots sparked by repeated police raids on a popular gay bar in New York. The demonstrations proved to be a turning point in the LGBTQ community’s struggle for civil rights.