Malami and the ‘Emergency rule’ in Anambra 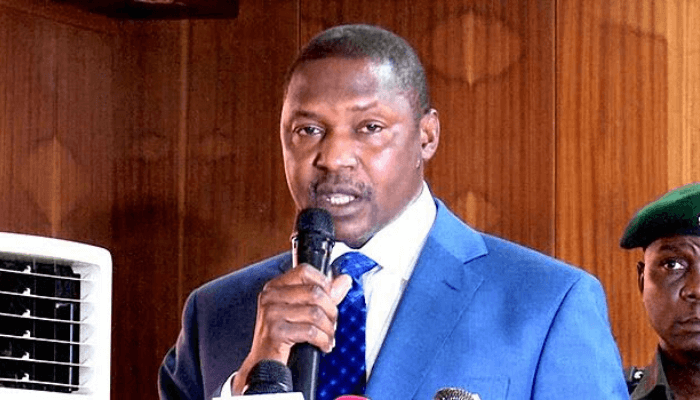 The Attorney General of the Federation/Minister of Justice, Abubakar Malami (SAN) last week threatened that the federal government may proclaim a State of Emergency in Anambra state. The state suddenly changed from its peaceful nature as the November 6 governorship election approaches to violence by unknown gunmen.

A prominent figure, Dr. Chike Akunyili, sadly lost his life in the imbroglio, amongst others. In total, about 10 persons have lost their lives to the unknown gunmen lately. However, many believe the violence is politically-motivated with a plot to manipulate the forthcoming governorship election in the state. Malami, who is also in APC-Anambra Campaign Council despite the sensitive position he occupies in the government displays the same body language like APC candidate, Andy Uba endorsing emergency rule. And the state witnessed similar mayhem when the present APC candidate contested in the PDP platform during Obasanjo’s administration.

Since Malami’s remarks, criticisms from leaders-of-thought have continued to trail it. The state governor, Willie Obiano without taking chances has reported the AGF to his principal, President Muhammadu Buhari. In fact, people were stunned that Malami whose state, Kebbi has also been under siege for years by banditry including countless abduction of school children could recommend Emergency rule on Anambra for a violence of few weeks. Though, Anambra violence is totally condemned, nonetheless, it must be noted that it doesn’t measure a fraction of the casualties the nation has recorded in places like Borno, Zamfara, Katsina, Kaduna, Benue, Plateau, Yobe, Niger, Adamawa, Taraba and others where terrorists have not only killed several thousands of citizens but also attacked military formations and slaughtered soldiers and other security officers. Terrorists have even brought down some sophisticated combat aircrafts. Amid these outrageous developments, Malami remains silent.

To be candid, this episode and other previous allegations that linked AGF-Malami leave much to be desired of the occupant of the sensitive position. Instructively, AGF must be nonpartisan. Unfortunately, under his watch, many developments had pointed to partisanship. Even the courts were recently used in obtaining frivolous orders as in the past. These inadequacies triumphed during the previous administrations, which Buhari vowed to stop by his ‘Change’ mantra. Thus, there’s no better time for President Buhari to put his house in order. Over the weekend, Chancellor of Austria, Sebastian Kurz voluntarily stepped down from office to clear himself of corruption allegations. This is an iconic leadership template.

Malami whose state, Kebbi has also been under siege for years by banditry including countless abduction of school children could recommend Emergency rule on Anambra for a violence of few weeks

Remarkably, President Buhari unyieldingly displayed statesmanship during the Edo election, and didn’t allow federal bullying interfere with the will of the people. Convincingly, Buhari can do it again, and must not allow his aides to defecate on his hard-earned integrity. Nigeria cannot go back to the dark years when governors were imposed on people through federal might. To AGF-Malami, the question begging for answers is; if a state is under attack, between the President who is the Chief security officer and commander-in-chief of the Nigerian Armed Forces, and the governor handicapped by the constitution, who should be liable? For emphasis, by constitutional arrangement, all security agencies take directives from the president. Hence, the call for Emergency rule in Anambra; believably a script to foist a lapdog against the popular-will is an indictment on the federal government. Even though the believably sponsored-mayhems cannot be compared with that of Borno or other states under a siege, however, it is worrisome as Anambra state for over 16 years has enjoyed peace, stability and progress.

ALSO READ  How Nigeria can enlarge cargo base through airports

Again and importantly, there are numerous untreated issues particularly allegations of misconducts linking some government officials, and the masses deserve to know how those weighty allegations were investigated. That is how other countries of the world make progress. As a matter of fact, had the various protests been tied to any specific and meaningful issue instead of ‘Revolution-Now’ or ‘Buhari-Must-Go’ they would have made serious impacts. Had any been directed towards the probity of any public officeholder, certainly, it must succeed with popular support as accountability is key in public service. But the organizers took it personally and misfired. Public officeholders cannot do whatever they like against standard norms.

For example, the publisher of Sahara Reporters, Omoyele Sowore had in a series of publications alleged that AGF-Malami, a public officeholder acquired several properties that run into billions of naira since appointment in Buhari’s government. It added that Malami has an underground hotel in Sokoto, three houses at Peace Estate, Abuja, a brand new state-of-the-art school in Kebbi, two houses for his sons worth N100million each, and a new hotel under construction in the Jabi area of Abuja. Others include a house he bought in 2020 worth N150million in the Gwarimpa area of Abuja, a newly constructed school located at the back of NITEL in Gesse Phase 1, Birnin-Kebbi, and a new house worth N600million on Ahmadu Bello Way, Nassarawa GRA, Kano. Furthermore, the whistle blew that Malami also built a N3billion multipurpose event-center in Kebbi state named Azbir Arena for his son, and Rayhaan Hotel located on Zaria Road, opposite Mallam Aminu Kano Teaching Hospital. As a public officeholder, investigation is necessary. What a list amid masses’ sufferings! Amid these allegations, instead of responding to them, Malami exposed the EFCC boss then, Ibrahim Magu, booted him out of office, and installed his loyalist. Perhaps for ‘protection’.

Despite the alleged weighty financial misconducts by Magu, he was merely sacked. The indictments cannot be a party affair. The public deserve to know what transpired that led to the coded removal of Magu from office, strangely, without prosecution. Magu cannot be shielded on the alleged diversion of proceeds recovered from corruption. Otherwise, the government should be willing to release all the helpless masses languishing in various Correctional centres across the country even for lesser crimes. These are where mass actions are requisite. And the government must treat these matters seriously and urgently. Some people cannot be above the law or sacred cows.

It must be recalled that this is a government that didn’t spare a Chief Justice of Nigeria in office who hails from another region, but docked him publicly over alleged illicit assets acquisition, and kicked him out of office before his term elapsed. Buhari, the time to act is now.

Umegboro is a public affairs analyst and social crusader