I’ve Seen How War Was Fought In Other Countries—Nigeria’s Army Chief, Yahaya Boasts Of Rich Experience 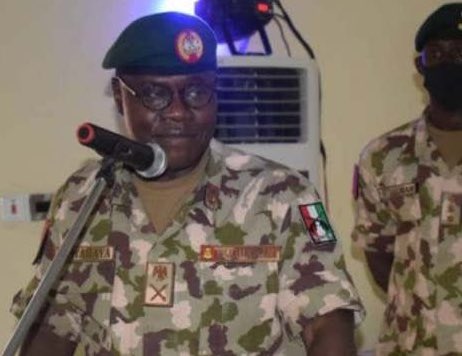 The Chief of the Army Staff, Maj Gen Farouk Yahaya, has stated that he had seen how war was fought in other countries and would replicate same in Nigeria to tackle insecurity.

Yahaya added that he had the required experience to tackle insecurity bedevilling the country.

The army chief stated this on Tuesday when he appeared for screening before the House of Representatives’ joint committee on defence and army.

Yahaya said he had participated in war and peace-keeping in Liberia, adding that with his experience, he can ensure improved security in the country.

The army chief said, “I have brought along with me 36 years of military experience, having joined the army on September 27, 1985, as a member of 37th regular course in NDA.

“I passed out on September 2, 1990, and I was posted to the infantry corps as an infantry officer, and since that time, I have passed through all the relevant courses commensurate to my career as I grew up, and I had served in various capacities, including command, staff, instruction and administration, including extracurricular.

“Less than three years ago, we were drafted to Liberia where I had first-hand experience in war, if you would call it so. And finally, my unit was located at Kata town, member of number 16 and for those conversant with that deployment, Kata town was the last deployment of the ECOMOG who were the ones facing Charles Taylor there.

“So, all activities including wars and operations, including of course negotiations, were conducted by my unit on behalf of ECOMOG.

“We have several times hosted the United Nations negotiations in Kata. We hosted other factional leaders, including Kromah, Johnson, and others in those negotiations. We also fought our way to that end.

“So, if you will, I have first-hand experience, barely three years after my passing out in war and its processes, similar to what we are facing now.

“After that, when we came back to the country, I was also promoted to guards brigade here where I served as platoon commander. So, I am also abreast with the security requirements of Abuja itself and the parade and other requirements that characterised that deployment.

“Subsequently, I grew up in my career to become commanding officer in guards brigade garrison in Abuja here, and so I was involved in all the security requirements of securing Abuja and, particularly, the presidential villa.”

Yahaya said going by his military experience, he was well equipped to tackle the security challenges across the country.

“Looking at my career, I have virtually seen it all. I have seen war in other countries; I have seen how it was done. I was involved also in internal security operations both there and here,” he said.

“What I brought is the certificate of experience and commitment I have had all across my career. Throughout my career, I have been appointed as at when due. I am determined to provide my best, having known what is required to achieve result.”