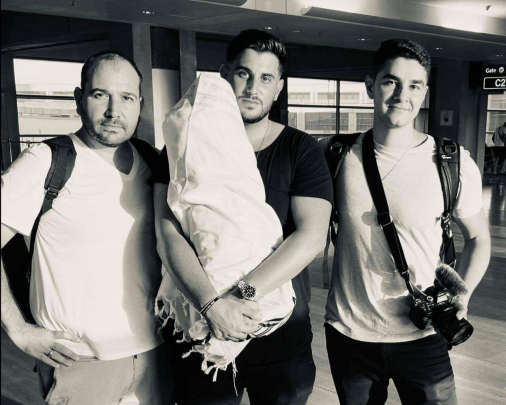 The families of three Israeli filmmakers shooting a documentary in South-East Nigeria have stated that the trio have no connection with the Indigenous People of Biafra, and other political or separatist groups in the region.

The families in a statement obtained by SaharaReporters on Wednesday asked the Department of State Services to therefore release them.

SaharaReporters had on Tuesday reported that the Israeli filmmakers, Rudy Rochman, Andrew (Noam) Leibman, and Edouard David Benaym were being held by the DSS on the suspicion that they had met with Biafran agitators and were working with them.

But the families clarified in a release that the filmmakers only came for a “documentary filmmaking effort to explore the lives and customs of Jewish communities around the world.”

They said, “On July 9th, Rudy, Andrew, and Edouard David were detained by the Nigerian Department of State Services (DSS), which continues to hold the three filmmakers in its custody.

“Rudy, Andrew, and others have been working for over a year to create a documentary series titled, “We Were Never Lost” (www.wewereneverlost.com). The series is designed to educate viewers about the religious and cultural experiences of lesser-known Jewish communities. Their goal is to interview members of Jewish communities across multiple African countries, along with Jewish communities in China, India, Afghanistan, and elsewhere.

ALSO READ  Teenager Drowns While Taking A Bath In Kano

“The filmmaking team selected Nigeria as the first filming destination, and Edouard David joined the team to assist with production. Nigeria was selected because it has a large and diverse population, a stable political and economic environment, and the infrastructure that would allow the film crew to travel efficiently to various cities throughout the county.

“This documentary is not intended to make any political statements about the countries in which filming will take place, nor does the filmmaking team endorse any political movements. The team is simply there to observe the communities, learn about their experiences with Judaism, and explain some of the documentary filmmaking process to those involved with the production. The filmmaking crew acts as a guest visiting the country and its various communities – there are no political overtones.

“The filmmaking crew thought it would be a nice gesture to bring several gifts with cultural symbolism to the communities it planned to visit. In Judaism, it is considered a good deed to give the gift of a Torah, which is the Hebrew Bible from which Jewish communities around the world read their scripture. As such, one of the gifts that the filmmakers brought was a Torah that they intended to give to a Nigerian community.

“Unfortunately, members of non-state political groups have hijacked for their own purposes images of the filmmakers gifting a Torah to a local community. These individuals are distorting the intentions of the filmmakers in an effort to manufacture a connection to local political matters when no such connection exists. These politically-motivated actors have taken a simple gesture of kindness and twisted it in an attempt to create an alternate meaning.

ALSO READ  Crime In Nigeria Has Attained 'Next Level'—Ganduje

“We are working diligently with the U.S., Israeli and French Embassies on the matter, and we greatly appreciate the attention they have given to the situation. Their involvement has helped to improve the conditions of the filmmakers while in custody – including the delivery of Kosher meals prepared by the local Chabad. As a sign of appeasement, the DSS allowed the French Embassy to host Edouard David Benaym on Tuesday night to receive some medical attention, with the intention of having him return to DSS custody the next day to continue the investigation.

“We hope that the DSS will quickly conclude what the facts support – that the filmmaking team has no political motives and that the team should be released from custody as soon as possible.”

SaharaReporters had on Tuesday stated that the crew was detained at a synagogue during Friday night services in the Igbo village of Ogidi by Nigeria’s secret police, the DSS and thereafter taken to Abuja.