IPOB Reacts To Burning Of Houses, Cars, Others By Suspected Nigerian Soldiers In Imo Community 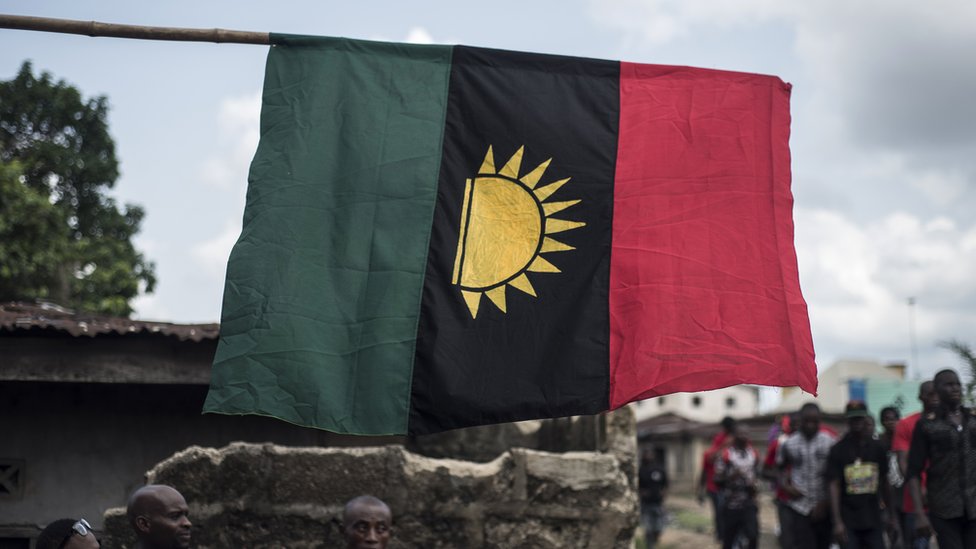 The Indigenous People of Biafra (IPOB) has disclosed that Nigerian Army personnel were responsible for the burning of houses, vehicles and shops worth millions of naira in Awo-Mmamma in the Oru East local government area of Imo State on Monday.

IPOB said the soldiers transferred their aggression to innocent residents of the community instead of engaging in battles with their attackers.

The group disclosed this in a statement issued by its spokesperson, Emma Powerful, which was made available to SaharaReporters on Friday.

The Nnamdi Kanu-led group revealed this as a reaction to the Nigerian Army’s statement that IPOB members were responsible for the destruction of the community.

Some gunmen on Monday afternoon killed a military officer when they attacked some soldiers in the community, and in reprisal, military operatives regrouped, invaded the town and allegedly razed all property on sight.

Reacting on Friday, IPOB said, “The attention of global movement and family of the Indigenous People of Biafra (IPOB) under the command of our indefatigable leader, Mazi Nnamdi Kanu, has been drawn to the fallacious and fabricated statement from the compromised Nigeria Army blaming IPOB for the atrocities they committed at Awo-Mmamma in Imo State on the 22nd of November, 2021.

“The allegation by the Acting Deputy Director, Army Public Relations, 82 Division, Nigerian Army, Major Abubakar Abdullahi, that IPOB and ESN (Eastern Security Network) are responsible for setting vehicles and houses on fire in Awo-Mmamma, Imo State, is false and intended to divert attention.

“It is too appalling that Nigerian Army set the whole community ablaze and burnt down the whole community because of attack by unknown gunmen created by the Supreme Court Administrator of Imo State, Hope Uzodinma in his quest to demonise IPOB and ESN operatives. Now that the monster they created has gone out of control they are blaming IPOB for their wickedness.

“The fact remains that IPOB is a non-violent movement seeking the peaceful restoration of Biafra. Neither IPOB nor ESN was involved in the mayhem at Awo-Mmamma community. The wicked Nigeria Army which cannot resist Boko Haram and Fulani bandits slaughtering them and other security agents as well as hapless citizens in North like fowls show their gallantry only when dealing with innocent Biafrans.”

The group faulted the security operatives for hounding innocent citizens in the South-East region, while terrorists and bandits are killing and abducting people in the North.

“Boko Haram is destroying lives and properties worth billions of Naira in the North and the Army has never attacked any community in retaliation but they are here shamelessly destroying Igbo land for nothing. They should know they will one day account for their atrocities in Biafra land.

“What did the innocent people of Awo-Mmamma do to deserve the destruction of their homes and means of livelihood by soldiers? Why did the Army not go after their attackers but cowardly transferred their aggression on innocent folks? What they did at Awo-Mmamma is unprovoked destruction of a defenceless community.

“The Nigerian Army is still penalising Awo-Mmamma because of their son Ikonso who it earlier murdered in cold blood because he was a member of ESN resisting Fulani bandits against the occupation of our ancestral land.”

“The 82 Division of the Nigerian Army instead of owning up to their atrocities at Awo-Mmamma, as usual, resorted to lies. No matter how hard they try to cover up, the truth cannot be buried,” the statement further said.

IPOB also rebuked Imo State Governor, Hope Uzodinma and Igbo leaders for not speaking against the alleged atrocities committed by the Nigerian army in the region.

“The good people of Awo-Mmamma already know who their attackers are. They know that IPOB and ESN were not involved in the burning down of their shops, properties and buildings.

“Nigeria Army must stop denying the obvious. The world must hold them accountable for their crimes against humanity in Biafra land.

“It is a big shame that the so-called political elite and Igbo leaders are watching purported repentant Fulani terrorists recruited into Nigerian Army destroy our communities. Last month they burnt down villages in Awgu, Enugu State, now it is Awo-Mmamma in Imo State.

“Just last week they burnt down two communities in Izombe, Oguta also in Imo State. Who knows where their next target will be, yet their own political elite is watching them?

“The global community must know that IPOB and ESN were not responsible for the burning down of communities in Biafra land contrary to blatant lies by the NIGERIA Army. There are credible videos and pictorial evidence showing Nigerian Army engaging in this inhumanity. They must be made to answer for their crimes.

“Hope Uzodinma should hide his face in shame for watching the destruction of the people he claims he is governing. No Northern governor can take this nonsense,” IPOB added.