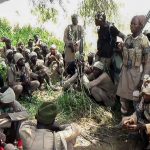 ABUJA –Â The Coalition Against Terrorism in Nigeria (CATE) has dismissed media reports that the Islamic State in West Africa (ISWAP) has taken control of some territories in the country.

The group made its stance known in a statement signed by National Coordinator, Gabriel Onoja, on Tuesday.

The media was awash with news that the sect known as â€œGroup of the People of Sunnah for Preaching and Jihadâ€� defeated the Nigerian military and captured some areas in the northeast.

CATEâ€™s statement reads in part: â€œCATE has tracked media reports of an alleged Sundayâ€™s captured or occupation of Marte, headquarters of Marte Local Government Area of Borno State, by the marauding terrorists operating around the Lake Chad Basin under the auspices of ISWAP.

â€œThe report turned out to be propaganda launched against the Nigerian military for the benefit of terrorists.

The group noted that the report of the said newspaper exposed a failure to reference on the ground facts but rather resorted to quoting â€œdependable sourcesâ€� and â€œsourcesâ€� to infer a development as serious as the alleged capture of a town. A few versions of reports on other platforms have embellished what they got from this initial source.

â€œKnowing that series of attempted incursions by Boko Haram terrorists has recently been ending in their being killed in dozens, the story convoluted facts to create the impression that the insurgents suddenly become invincible overnight, whereas they were dealt decisive blows in their attempted attack similar to the trouncing they have suffered in recent weeks.

â€œCATE has contacts on the ground in the affected area. They have confirmed that what transpired in Marte was blown out of proportion, which raises the question whether Nigeria is in the grip of mischief by a section of the media that has resolved to be unpatriotic. Nothing in the reported capture of Marte checked out.â€�