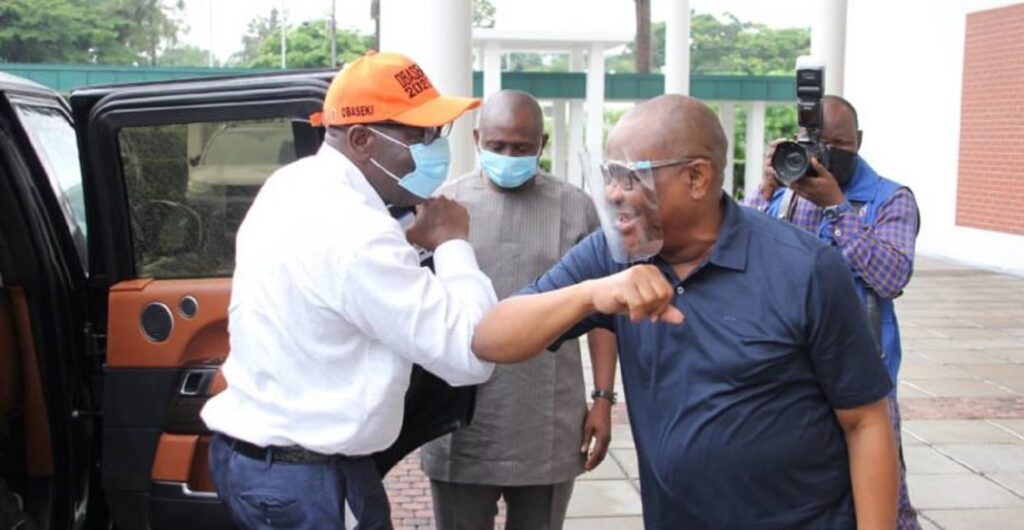 Says Obaseki’s fight against godfatherism will earn him second term

Chairman of the Peoples Democratic Party (PDP) National Council for Edo 2020 gubernatorial election and Governor of Rivers State, Nyesom Wike, has said the party and its candidate, Mr Godwin Obaseki, will resist plans by the All Progressives Congress (APC) to unleash mayhem on voters in the state in order to rig the forthcoming poll.

Wike, who spoke on Channels Television’s Sunrise Daily programme, Tuesday, said the governor has resolved to quash acts of violence by the APC, its sacked National Chairman, Adams Oshiomhole, and the party’s gubernatorial candidate, Osagie Ize-Iyamu.

Wike noted: “We have always preached peace, free and fair election ahead of the gubernatorial election and even Governor Obaseki during the flag-off of our campaigns urged our supporters not to retaliate despite attack on us, intimidation and harassment of our supporters, destruction of our billboards and threat by the APC to use violence to disrupt the forthcoming election in the state.

“In a viral video, the candidate of the APC, Ize-Iyamu, met with thugs and cultists and one Kabaka introduced them to Ize-Iyamu as the ‘Lions and Tigers’ from all the local government areas of Edo State. In the same video, Ize-Iyamu charged them to move from units to units and subsequently move to other wards and local government areas to cause mayhem because they have what it takes to win the election by all means. But under the Electoral Act, you don’t move from one unit to the other unit. So, what does that tell you? Violence!

Wike stated that the forthcoming election would be an easy one for the PDP to win because of the previous comments made by Oshiomhole about the APC candidate.

“Four years ago, the former national chairman of the APC said that Obaseki was his brain box and the person behind everything he achieved; it is clear, he said so. The same man said the PDP candidate in the 2016 election was not electable. Why was he not electable? According to Oshiomhole, Ize-Iyamu can’t be trusted with money. The same man who you could not give an appointment or entrust with money is the same man you are telling Edo people to now vote for.

“You wake up in the morning and you tell Edo people something, and in the night you call the same Edo people and say, what I said in the morning, I didn’t mean it; how do we now know the one that you meant?” Wike queried.

The Rivers State Governor restated that his Edo counterpart earned the confidence of the people by resisting godfatherism in the state and will be reelected.

“The mere fact that Obaseki resisted godfatherism should be the one reason Edo people should vote for him. There are so many things about this election; it has nothing to do with Obaseki as I said. Edo people are ready to end godfatherism now?” he added.