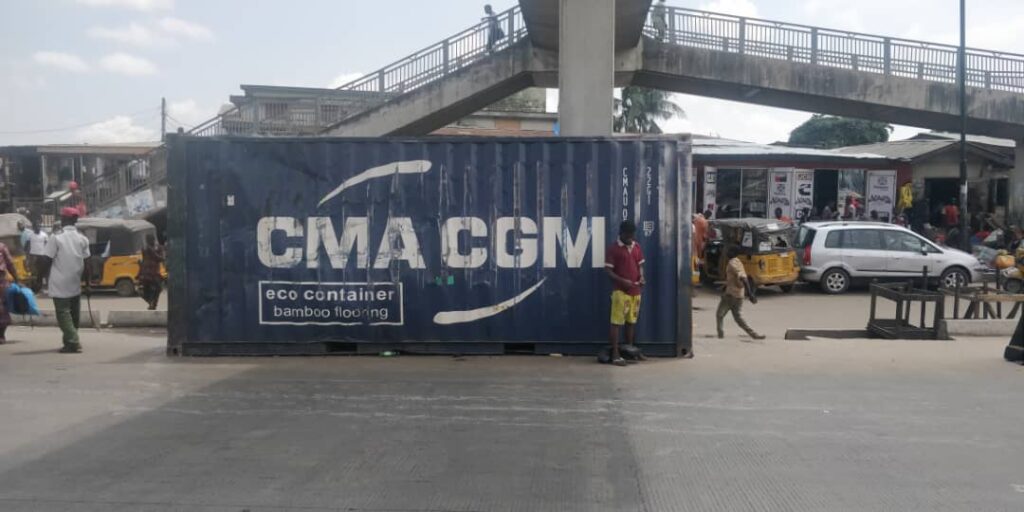 A 20ft container fell off a moving truck at Ilasa, along the Oshodi-Apapa expressway, landing on a commuter bus.

Eight passengers, among them two staff of the Federal Airport Authority of Nigeria, FAAN were killed while others who managed to jump out of the bus sustained varying degrees of injuries.

The mangled bodies of the victims were later removed after the container was lifted.

Identities of the FAAN staff were: Ajoku Chidinma, 27, a graduate of Babcock University, Ogun State and one Chima. They had closed from work last Sunday and were on their way home when the unexpected occurred.

Late Chidinma’s distraught mother, who was just smarting from the demise of her husband , could not be consoled as she described her daughter’s death as devastating.

In an interview with her, she explained that ” we were told that driver of the commercial bus in which my daughter and her colleague were, stopped to either pick or drop passengers at Ilasa bus-stop when a reckless trailer driver on high speed fell on the bus.

“Meanwhile, I was waiting for her to return home. I dialled her number, no response. I called her aunt whom she stayed with at Surulere. Both of us didn’t sleep until 6 am when a colleague of hers called me to say they were involved in an accident and that they were at the Isolo General Hospital.

” This incident of container falling on vehicles is getting too much. These container drivers keep killing people and nobody is talking.

“My daughter was just 27 years and had plans to travel abroad for her Masters in the near future, only to have life snuffed out of such a promising girl and her colleague.

“I appeal to the authority concerned to bring these people to book. The government should do something because It is getting too much especially in Lagos. I remember there was a time when these trucks were virtually off the road in the day and were only allowed to ply at night. Now, they are everywhere, driving recklessly. I don’t know what they drink while driving which makes them fall on cars. There had been several similar cases that happened and nothing was done to bring justice to the victims.

“But my daughter’s can’t go just like that If my daughter’s case will be used to stop these unwarranted killings, then, let it be what I have achieved. I know they will say I am a nobody. But I think everybody in Lagos, whether you have a car or not, our lives are in danger because we encounter these trailers and containers every day because they are very reckless. We should champion this course together. We should not wait until more persons are killed”.

At this point, she broke down in tears afresh as sympathisers tried to console her.

Continuing, she said, ” I sent a cousin to the Ilasa police station and the Police said they could not trace owner of the truck. We were told that the driver and conductor took off with the truck’s particulars. Again we were told that owner of the truck called to say he was coming. But nothing has been heard so far. All I demand is justice for my late laughter. Chidinma was my first daughter”.

The post Distraught mother whose daughter died in road accident cries out for justice appeared first on Vanguard News.