‘Deliver Us From Union Of Death In Nigeria’—Yoruba Nation Agitators, Others Protest At UN Headquarters To Demand Referendum 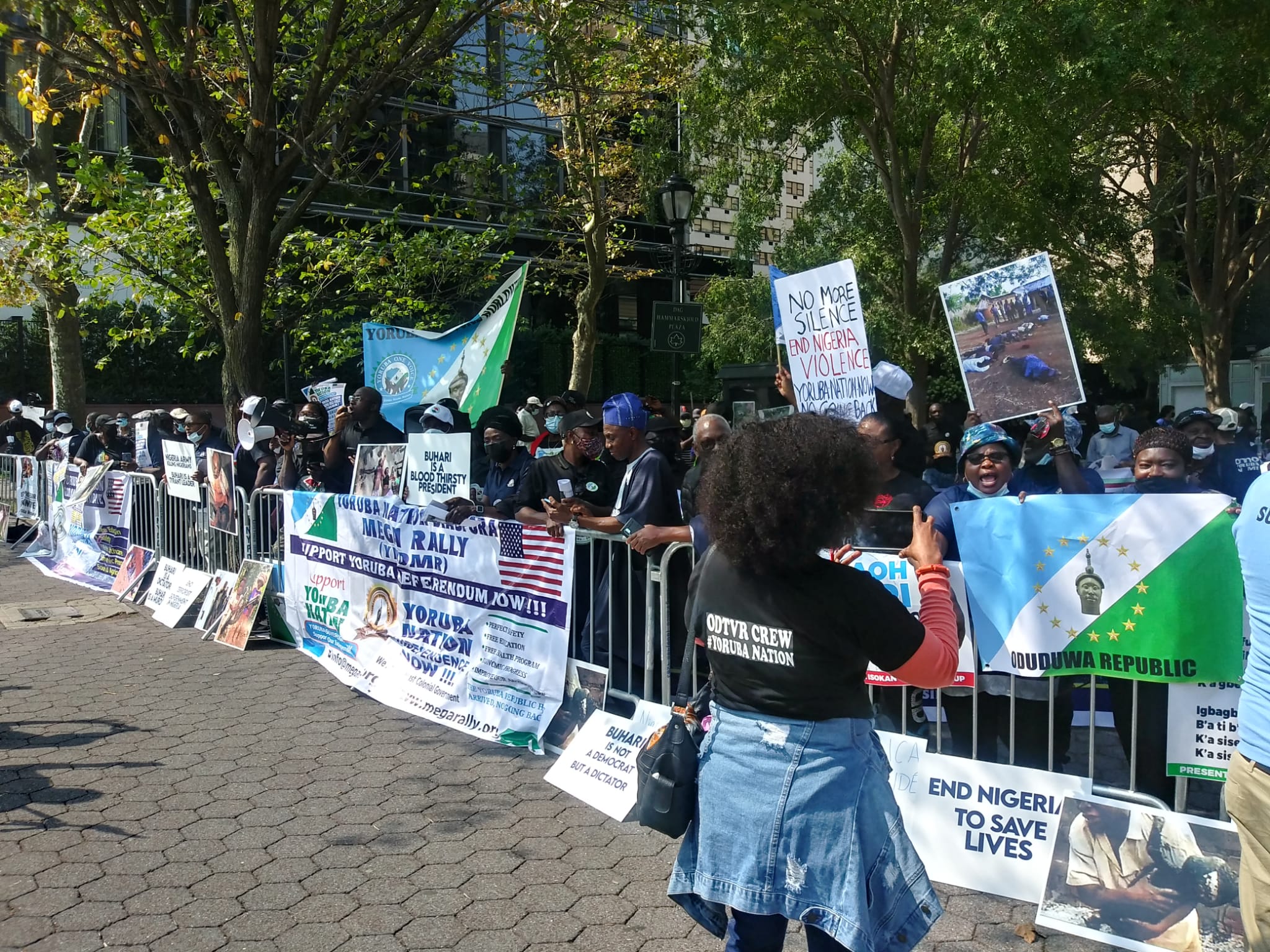 Members of the Nigerian Indigenous Nationalities Alliance for Self-Determination (NINAS) are currently holding a protest opposite the United Nations headquarters in New York, United States.

In photos obtained by SaharaReporters, they have taken to some streets to drive home their demand for a referendum so as to actualise their dream of having Nigeria broken into separate nations.

The group had stated that it would hold a protest at the 76th Session of the United Nations General Assembly in New York.

A letter addressed to the United Nations General Assembly by NINAS reads: “We, the Indigenous Peoples of Nigeria gather today at the Headquarters of the United Nations in New York to alert the UN, and the rest of the Global Community that the Union of Nigeria has failed irredeemably; and is now at the verge of a Violent Disintegration with Catastrophic Consequences for Global Peace, and Security as our population of over 200 million would become an Instant Global Refugee Nightmare.

“Amidst the extraordinary difficulties inflicted by the imposition and enforcement of Sharia by a section of Nigeria in a supposedly Secular Union, the immediate reason for this looming catastrophe is the cocktail of mass killing, kidnapping and general banditry being orchestrated against the Indigenous Peoples of Nigeria by an invading Fulani militia masquerading as herdsmen in an undisguised ethnic cleansing campaign that progressively demonstrate the complicity of the Federal Government of Nigeria headed by Major-General Muhammadu Buhari, a Fulani man, who as Commander-in-Chief of the Armed Forces of Nigeria is also the Life Grand Patron of the notorious Miyetti Allah Cattle Breeders Association of Nigeria; that proudly takes responsibility for the Murderous Exploits of the Fulani Herdsmen militia designated the Fourth Most Deadly Terror Group.

“Compounding their impunity, the same Miyetti Allah Cattle Breeders Association at a recent Press Conference organised to mock the Planned NINAS Million-Man Freedom March to the UN, boasted to be in control of the UN through their daughter, Amina Mohammed, the Deputy Secretary-General at the UN.

“An indication that (Amina Mohammed) nominated to that Exalted UN Position by the Fulani President of Nigeria Major-General Muhammadu Buhari, is in some way a part of the Grand Protection Design for the Fulani Herdsmen in their bloody onslaught against the Indigenous Peoples of Nigeria.

“It will be recalled that following widespread extrajudicial killings in Nigeria, the UN in August of 2019, dispatched a Special Rapporteur Mission to Nigeria led by Agnes Callamard.

“The Damning Verdict of that Rapporteur Mission was that the widespread extrajudicial killings were flowing from the Unitary Constitutional Arrangements of Nigeria, which operates as a PRESSURE-COOKER FOR INJUSTICE and that Nigeria under that Constitution is a Danger to Global Peace and Security.

“The report warned that unless something is done urgently, Nigeria would Snap, plunging its 200 million Population into turmoil that will trigger a Large-Scale Refugee Crisis of unprecedented magnitude at a time the Global Terror Networks, ISIS, ISWAP and AL-Qaeda are already converging in Nigeria.

“It will be recalled that in furtherance of the Repudiation and Rejection of the Unitary Constitution of Nigeria (1999), and the Toxic Union it foists, the Nigerian Indigenous Nationalities Alliance for Self-Determination (being the South and Middle-Belt of Nigeria) on December 16, 2020, declared a Constitutional Force Majeure, raising a union dispute with 5-Point demand for the termination of the operation of the aforementioned imposed Constitution; for the immediate commencement of remediation of the long-standing grave constitutional grievances of Nigeria’s constituent components, failing which the peoples of the alliance territory would reconsider their allegiance to that constitution.

“The Key Highlights of the five-point demand include the suspension of the further elections (Particularly the 2023 elections), under the repudiated 1999 constitution as well as the initiation of a time-bound transitioning arrangement to mid-wife the emergence of fresh constitutional protocols founded on the sovereignty and self-determination rights of the constituent components of Nigeria. An online petition conveying the demands of that constitutional force majeure proclamation, is currently before the UN Security Council.

“That Nigeria has failed as a State is no longer a Subject for Debate, having emerged the Global Poverty Capital, and Playing Host to Two of the World’s Top Four Most Deadly Terrorists Organisation, with Three-quarters of the Constituent Components (South and Middle-Belt) seeking urgent extrication by way of referendums from what has become a union of death.

“Looking back at the recent turn of events in Afghanistan, this freedom march to the United Nations Headquarters in New York is to alert the Global Community of the rapidly degenerating situation of Nigeria, and to invite United Nations, particularly the Security Council, and Trusteeship Council, to initiate Urgent Steps to Arrest Nigeria’s Descent into Chaos, as besieged communities drift dangerously to self-help.”