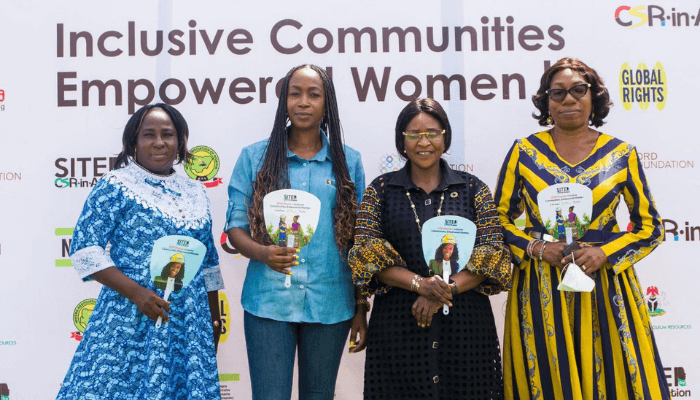 CSR-in-Action Advocacy, the charitable arm of one of sub-Saharan Africa’s sustainability advocacy and consulting outfit, CSR-in-Action Group, has empowered rural women in the Badagry area of Lagos State to tackle gender-based violence (GBV), women exclusion and other pertinent social challenges facing them. This was done via a recent workshop themed Inclusive Communities, Empowered Women, which was held recently at the riverine oil-producing community.

The workshop, co-facilitated by partner, Spaces for Change, analysed issues that have limited women’s terms of participation in society such as violence and gender inequality, and with the radio series, outlines strategies by which women can rise to overcome these challenges.

It is part of the ‘SITEI-Woman’ project, a series of initiatives targeted at empowering women, especially those impacted by the extractive industries in Nigeria.

SITEI-Woman is an offshoot of the 10-year-old Sustainability in the Extractive Industries (SITEI) Initiative of CSR-in-Action aimed at fostering fiscal and social justice for communities with oil and gas and mining resources.

The project, funded by Ford Foundation, also featured representatives from the Lagos State government as well as partners and community leaders in the Badagry area.

According to Abosede Oluwakemi George, permanent secretary, Office of the SDGs and Investment, who represented Solape Hammond, special adviser to the Governor on SDGs and Investments, women often suffer severe difficulties in silence.

“It is time for them to rise and speak up about those challenges threatening to limit their progress, as well as their active contribution to society,” she said.

Condemning the conspiratorial silence often accompanying the occurrence of violence against women in the society, Adeniji Oluwatoyin, assistant director of Community Development, Ministry of Chieftaincy and Local Government Affairs, Lagos, challenged the participants to “go back to our various communities and tell everyone to speak up whenever such incidents happen to them or others around them.”

“In Nigeria, women have been largely excluded from the growth and the development opportunities given by extractive industries in communities, while being at the same time disproportionately vulnerable to many of the risks associated with them,” said Bekeme Masade-Olowola, chief executive of CSR-in-Action and organiser of the event.

“SITEI-Woman is aimed at tactfully questioning and reversing those norms that have culturally and systematically hampered women’s progress,” she said.

Addressing participants in Yoruba, Sewede Pot-Balogun Olorunfemi, women leader, Badagry Development Women Forum, lauded the initiative, which aims to encourage and empower rural women to demand for more rights and benefits for themselves and their children.

“This is a step in the right direction, and we are happy that the CSR-in-Action team has chosen Badagry for this workshop,” Olorunfemi said.

Other partners of the workshop include Zenera Consulting, Olu Kosoko Foundation, BSJ Foundation, the Badagry Development Women Forum and the Badagry Chamber of Commerce, Industry, Mines and Agriculture.