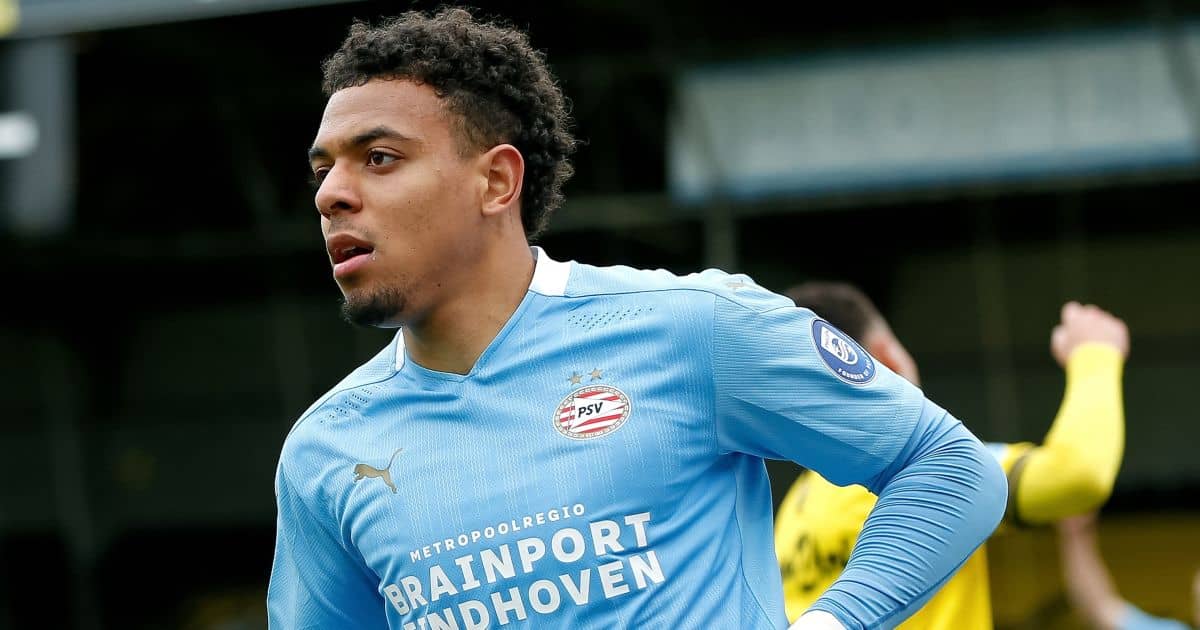 Man Utd’s impending move for Jadon Sancho has set the wheels in motion on another move with personal terms reportedly now agreed for an attacking Liverpool target.

News of Sancho passing his medical has edged the winger’s protracted move to Old Trafford another step closer. The Red Devils will now boast a fearsome forward line they hope will thrust them back into genuine title contention next year.

The front three of Liverpool had been the envy of European football for multiple seasons. Though barring Mohamed Salah who bagged 22 league strikes, the Reds’ frontmen took a collective step back in 2020/21.

Sadio Mane and Roberto Firmino both struggled throughout the campaign. Diogo Jota excelled when fit, but Divock Origi and Xherdan Shaqiri can rarely be counted on and Harvey Elliott remains a work in progress.

As such, rumours had swirled Liverpool were in the running for PSV’s Dutch goal machine, Donyell Malen.

The 22-year-old bagged 27 goals and 10 assists in all competitions last year, and a report earlier in July suggested talks were underway with Malen’s agent, Mino Raiola.

However, Jurgen Klopp’s side are not the only ones who have taken note of Malen’s rapid rise.

This is Anfield (citing German newspaper Bild) reveal that Malen is Borussia Dortmund’s primary target to replace the outgoing Sancho.

And per Goal’s German football journalist Ronan Murphy, significant progress in their pursuit has been made.

He (referencing Bild) tweeted that Dortmund have ‘agreed personal terms’ with the attacker. Work remains to be done before Malen can move to the Bundesliga, however, with the two clubs said to be €5m apart on the prospective transfer fee.

PSV are holding out for €30m while Dortmund have reportedly only offered €25m thus far.

Those figures would not be beyond the reach of Liverpool should they wish to hijack the move. However, the player’s apparent €100,000-per-week wage demands have put them off.

Indeed, that level of weekly outlay for a star who would likely not be a regular starter would be hard to justify.

Instead, the Reds may be better served focussing their attention elsewhere within the squad. A decision on who should replace Georginio Wijnaldum has yet to be made.

Fancy a punt on the Scottish Cup tonight? Here’s our 7/1 acca

Meanwhile, Manchester United could rival Liverpool for the signature of Atletico Madrid midfielder Saul Niguez on one condition, according to reports in Spain.

Reports over the weekend claimed that Liverpool had seen an opening offer turned down. Atletico are holding out for a very reasonable fee between €40m and €50m. It may not be Liverpool who pays that price, though; Barcelona have also considered a swap deal that would send Antoine Griezmann back to the capital.

Their financial situation may make things difficult, though. Indeed, the latest update from AS (via Sport Witness) suggests that Atletico think they are more likely to find a buyer for Saul in England.

While Liverpool continue to be linked, Manchester United could now revive their own interest, the report claims.

The Red Devils would only make a move for Saul, though, if they sell Paul Pogba. As he enters the final year of his contract, a sale may be necessary to avoid losing him for free. They are working on a new deal for him, but are aware of interest from elsewhere.