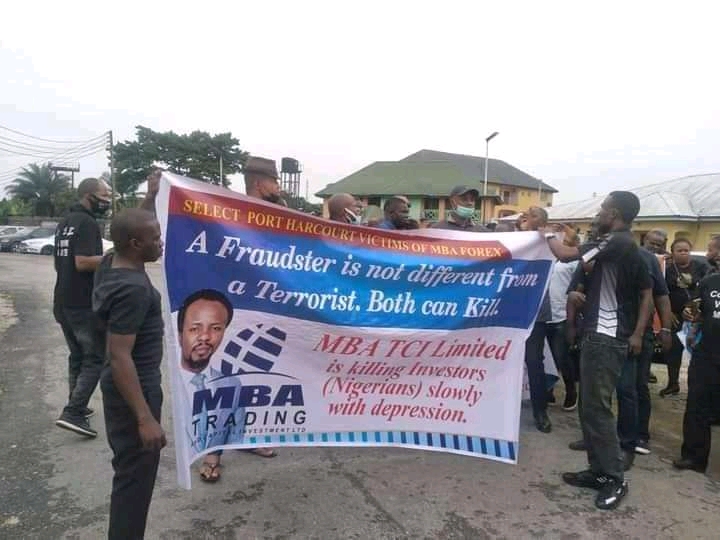 The aggrieved investors of MBA Trading and Capital Investment Limited in Rivers State, a forex company, have met with officials of the Central Bank of Nigeria (CBN) to know the outcome of its investigation into their funds.

SaharaReporters had reported last month that the disgruntled MBA forex traders stormed the offices of the Economic and Financial Crimes Commission (EFCC) and Central Bank of Nigeria over the delay to recoup their capital and return on investment (ROI).

They have written several petitions against MBA Trading and Capital Investment Limited, a forex training and capital investment company, and its Executive Officer, Maxwell Odum, who is now at large over their inability to pay capital and ROI to investors.

However, the latest of their action was the meeting they had on Tuesday with the CBN representatives.

Some of the MBA investors disclosed this to SaharaReporters on Thursday.

SaharaReporters learnt that the meeting was based on their request for the outcome of 180-day investigation period on MBA trading and capital investment limited accounts which received over N171bilion from Nigeria investors.

The CBN representatives in the meeting with MBA Investors delegation assured investors that the CBN felt their pains and the apex bank would not relent in doing everything in its capacity to make investors get back to their invested capital.

One of the affected investors said the CBN was aware of the order granted by the court to investigate MBA finances for 180-day had elapsed on August 11, 2021, but the case was in court and more Investors had sued the CBN and MBA.

Speaking on behalf of the aggrieved investors, Mr Henry Senibo said the CBN only approached the Federal High Court for an interim court order to stop all debit transactions from MBA accounts for 180 days pending the outcome of the said investigation.

“CBN did not sue MBA in court and so it cannot say it has not concluded its investigation as a result of numerous litigations from investors. MBA investors are in poor conditions, and some investors have lost their lives as a result of this pending issue,” Senibo said.

He further stated that from the information gotten from those who took CBN to court, it was revealed that what was frozen in MBA accounts by the bank was not more than two hundred twenty million naira.

“We wonder why the apex bank cannot conclude its investigation within the stipulated time frame granted by the court,” Senibo added.

The MBA investors’ spokesperson for the group added that they had decided to carry out a non-stop protest to the CBN offices nationwide until the bank made its investigation known to investors.

He further enjoined the affected investors to cease litigation so as to not compound the already compounded issues on ground as advised by the legal department of the apex bank.